Sufficiently intelligent individuals know better than to get involved in politics. As a result we are left with the politicians we have today. Unfortunately, I must not be sufficiently intelligent. I have sought truth regarding the current plight between Palestine and Israel. Like my old friend Socrates, I too believe that constant questioning leads to truth. 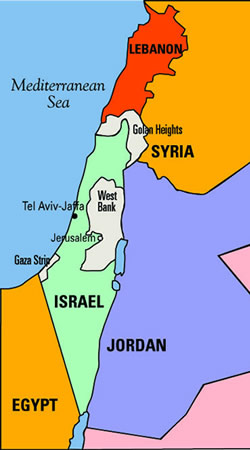 The history behind their conflict can be presented succinctly as follows. In the 1500′s, the region of land in dispute was known as Palestine and was ruled by the Ottoman empire. Up until the beginning of WWI in 1914, there was no significant conflict between the Palestinians and the Jewish people [1]. To escape prosecution in Nazi Germany many Jewish people began to immigrate to Palestine. After the war, the British gained control over the land and the Jewish settlements were publicly supported with the Balfour Declaration in 1917 [2]. Up until WWII in 1947 there was a lot of pushing and shoving for power between the land’s two inhabitants. After the war, the United Nations broke the land into 2 states, Palestine and Israel [3]. Palestine opposed the resolution on the grounds that the land was originally theirs. In an effort to retake their land, Palestine rallied the support of its neighboring countries and the united forces of Egypt, Jordan, Syria, and Palestine invaded Israel in 1967. Israel defeated the united forces and during the war acquired the Palestinian land previously partitioned by the United Nations [4]. The conflict did not end at the cessation of the war. In 2007, Israel gave the land known as the Gaza strip to the Palestinians as a part of the unilateral disengagement plan [5]. So in summary, the conflict between Israelis and Palestinians began as a fight for land.

So for all practical purposes the Palestinian people were routed from their home. They made an effort to retake their land and were unsuccessful. So what is the current conflict based upon? Are they still fighting for their land? A quick search through Google regarding the current political affairs paints Israel to be the aggressors. There are many videos and links about the brutal killing and torture of Palestinian civilians by the Israelis. There is a full documentary about how the Isreali military is raiding homes and kidnapping Palestinian children for interrogation. The evidence seemed to be pretty clear. However, I found all of this to be a bit curious. For example, the Israeli military has roughly 4000 tanks and 450 aircrafts, the Palestinian forces have 0 tanks and 0 aircrafts [6]. Yet Israel ceded the Gaza strip to the Palestinians in 2007. If the Palestinians pose no threat to Israel why would they give them land? What would drive them to commit the heinous acts described in the many videos and articles on the internet? The claims just didn’t support the facts. So I began to dig deeper and what I found was a surprising insight into how technology has created a paradigm shift in modern warfare tactics.

“Jenin Jenin” was an hour long documentary of Palestinians sharing personal testimonies about their hardships throughout the conflict. These were stories about Israeli soldiers shooting women and children, trampling elderly men with tanks, and molesting women. The first 15-20 minutes were moving, but after a while it seemed to be just a collection of emotional Palestinians telling stories about what happened. They did not present any testimonies from Israeli soldiers. War is awful. It has happened throughout all of history and no matter how it is carried out, people always suffer. While it is clear that the Palestinians have suffered, there was no evidence presented that even suggested the veracity of their claims. I felt as if I was being manipulated, as if I were being persuaded to sympathize with the Palestinians. To illustrate my point, below is a clip from the documentary where a young girl talks about her experiences. In my opinion children don’t talk like this. Perhaps I don’t know children very well, or maybe the translations are just not very good. Regardless you should watch the entire documentary and draw your own conclusions.

“The Road to Jenin”, while still being somewhat biased, at least provided interviews with people from both sides. In this documentary the Palestinians tell equally horrific stories of what went on. This time however, facts are presented demonstrating their exaggeration which supports my previous hunch. What really brought everything together for me was the interview with the Palestinian children. The things they said were appalling. There was so much hate in their voice, and you could see the determination in their eyes. The interview with the children is shown below.

For me, this was enough evidence to form some basic opinions on the matter. Firstly regarding the claims that Israel mistreats non-Jewish children. Whether they are true or not, once you put a gun in a child’s hands they are not longer a child, but a soldier. If I were in Israel’s situation where the Hamas (a terrorist organization occupying the Palestinian territory [8]) were using children as suicide bombers and undercover soldiers to kill my people and destroy my country, I would also treat the children like soldiers. Secondly, much of the information on the internet about how Israel continues to kill young Palestinian children, seems to leave out the part about how those children were first trying to kill the Israelis. This is similar to the documentary “Jenin Jenin” which seems aimed at building compassion in the heart of the viewers. With the previously mentioned military strengths in consideration, the Hamas leaders know they cannot win in combat. So it seems they are waging a different kind of war, an information war. If they can persuade enough of the world to sympathize with them, then Israel can not retaliate for fear of political backlash. A recent article by Daniel Pipes summarizes this situation excellently.

“No longer: The battlefield outcome of Arab–Israeli wars in last 40 years has been predictable; everyone knows Israeli forces will prevail. It’s more like cops and robbers than warfare. Ironically, this lopsidedness turns attention from winning and losing to morality and politics. Israel’s enemies provoke it to kill civilians, whose deaths bring them multiple benefits.”[9]

Inspired by Daniel’s article, I continued my research looking for more evidence to support the idea that the Hamas was spreading propaganda and waging an information war. I found an interview with Hamas leaders where they openly encourage Gaza citizens to “protect” the Hamas official’s buildings with their bodies. As a consequence the Israelis will be more reluctant to continue their attacks. It is tactics like this that lead to the death of Palestinian civilians and it is their deaths we continue to hear about in the media.

So in conclusion who is right and wrong? In the real world we must make decisions based on incomplete information. The point of this post is to share information that seems to be poorly represented in the media. Palestinians are certainly entitled to feel robbed by the Israelis for occupying what was once their land. However, the UN clearly resolved to divide the country into 2 states and it was the Palestinians who attacked Israel. Does the loss of their land 40 years ago warrant strapping bombs to children? According to western standards – not likely. However the conflict is not occurring in the West and we must keep that in mind when forming our opinions. What is most important is that people have access to as many sides of a story as possible when drawing their own conclusions.

One Response to Israel and Palestine – 21st Century Warfare