After I installed OpenCV I wanted to get started with some image manipulations. The concept is pretty simple with Computer Vision being defined as basically “the transformation of data from a still or video camera into either a decision or a new representation” bradski. OpenCV provides a certain procedure for loading the data of the images. So the first thing I did was get comfortable with some of the basic image handling protocol.

Get the code from my Git Repository
If you need help with Git, follow this quick introduction – Getting Started With Git

It’s pretty clear from here why OpenCV is so user friendly, it’s interface is notably intuitive. My impression of the highgui.h header thus far leads me to believe it is host to the display functions which post all of the image data, as it’s name “highgui” suggests.

IplImage is a data structure, it is used to store image data. It got it’s name from it’s home, Intel, and it stands for Image Processing Library (IPL) Image. Here’s a taste of what it looks like.

Most of it is pretty intuitive, but I’m sure I’ll learn more about some of it’s more obscure data members soon. A problem I faced next was; given an image, how do I extrapolate all of that data? That’s where the next function came in.

This is an impressive function. It parses through it's argument, interprets all the information, and fills in that IplImage structure with all the data and finally returning a pointer to the IplImage. It allocates the appropriate memory size and has support for the following formats

Notice however that I assign it to img. img is a pointer to the IplImage. That data structure is large and bulky, so passing it around by value would be costly in overhead.

Alright, so I've got an image loaded into my program here, how do I output it? What I learned next is that have you create your own windows for data output.

The first parameter, the character array, is the name I used to refer to this exact window throughout the rest of the program, and the second is the windows size. There is something interesting to note here, the window variable name "Example1" is also the name that appears on the window after it is displayed... I haven't found any workarounds for this yet. I'm not sure if there is a need, but what if you want to make multiple windows with the same name, but need to refer to them independently throughout the program? Please let me know if you find a solution.

Now I noticed when the window appeared it was always in the corner... mathnathan doesn't like this... So a simple little move window function served me great here.

Remember, "Example1" is now the string literal I had to use to refer to that window. The next two parameters are ints. They simply refer to the (x, y) coordinates where the window's upper left corner will be.

I got an image loaded and a window up, so then I needed to put the image in the window. OpenCV provides a function which displays an IplImage* pointer in an existing window, in my case "Example1".

To make the window go away I simply waited for any key to be pressed.

When given a parameter of less than or equal to 0, this function simply pauses the program and waits for a key to be pressed. Any positive integer will pause the program for that many milliseconds. This is the only function within highgui for event handling.

Being the good little C programmer that I am, I freed the allocated memory used to hold the image.

Be sure to take note that this function expects a pointer to the IplImage*. So you should submit the address using the reference operator ' & '.

Lastly I destroyed the window.

I'm quite fond of this function, they really gave it a great name. Programming suddenly got way more fun!

The program is ready to go, but building it wasn't as easy a gcc myprogram.c it required linking to the OpenCV libraries. This can be a nuisance, however OpenCV makes linking to their stuff a breeze when using CMake. If you're new to CMake and would like a quick introduction, check out my Getting Started with CMake tutorial. When I built OpenCV from source in the previous post, it produced an OpenCVConfig.cmake file (making it easy!) for me to put into my CMakeLists.txt file.

Plain and simply that's all there was too it. I saved that as my CMakeLists.txt file, moved into the build directory, ran cmake, then make, and tested my program with some sample pictures. SUCCESS!

Using my new found image handling skills I attempted to smooth an image using cvSmooth(). There are a few minor additions to the previous program.

Get the code from my Git Repository
If you need help with Git, follow my quick introduction - Getting Started With Git

First off, I added cv.h into the mix here. This is where I found all of my Computer Vision toys. To be able to see the before and after I created another pointer to an IplImage* data structure to store the transformed data which I called, out. I learned another method for creating an image without using the cvLoadImage() function, which I garnished here.

I got the size automatically using cvGetSize.

The function cvGetSize returns number of rows (CvSize::height) and number of columns (CvSize::width) of the input matrix or image. If I were to have the *roi pointer pointing to a subset of the original image, the size of ROI (Region Of Interest) is returned.

The next parameter is an int, and is the bit depth of the image elements. Lastly it wants the number of channels for the image. That is the number of channels per element (pixel), which can be 1, 2, 3 or 4. The channels are interleaved, for example the usual data layout of a color image is: b0 g0 r0 b1 g1 r1... Although in general IPL image format can store non-interleaved images as well and some of OpenCV can process it, cvCreateImage() creates interleaved images only.... How sad...

And finally here is the transformation.

Your source image and destination image are self explanatory, the next parameter is your smoothing algorithm and
the other 3 parameters depend on the smooth type, here is another reference to the various smooth types. brasdki 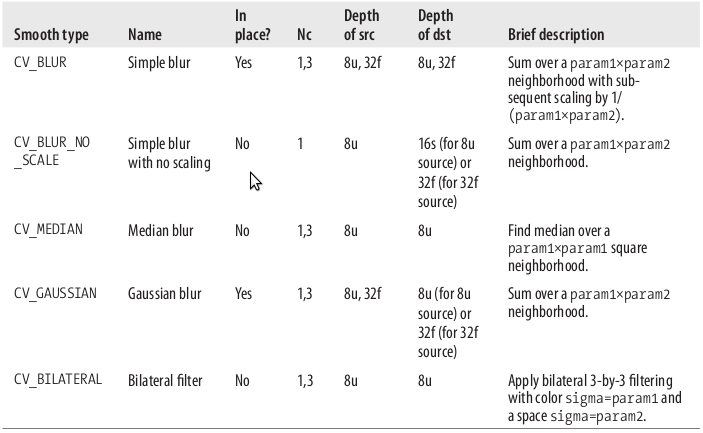 I then displayed the output image in the "Output" window and was a good little C programmer and cleaned up after myself.

So those are the changes in the new program. It takes an image as input, makes a copy, creates two windows, displays one image, runs the other through a smoothing filter, then displays that one aswell! Easy stuff. Here is the output I received after running a picture of myself through the filter. COOL!! 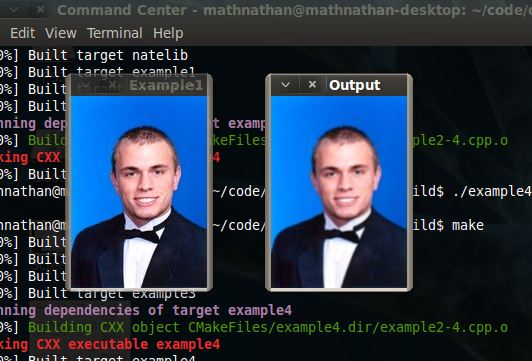 This entry was posted in OpenCV Journey. Bookmark the permalink.